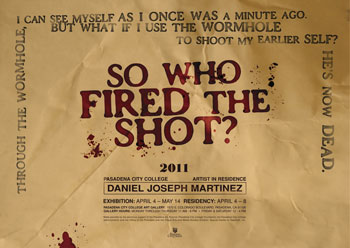 Daniel Joseph Martinez, a graduate of California Institute of the Arts, is internationally recognized for his politically charged art. His work has been exhibited internationally since 1978. He officially represented the United States in the Cairo Biennial in 2006, and has participated in major exhibitions in cities ranging from Lima, Peru to Moscow, Russia, as well as the Whitney Biennial exhibitions of American Art in both 1993 and 2008. A book devoted to his career, Daniel Joseph Martinez: A Life of Disobedience, was published in 2009 by the German publisher Hatje Cantz.

Additionally, the following resources are freely available on the web: