Susan Straight has published eight novels: Aquaboogie (Milkweed Editions, 1990); I Been In Sorrow’s Kitchen and Licked Out All The Pots (Hyperion, 1992, Anchor paperback, 1993), which was named one of the best novels of 1992 by both USA Today and Publisher’s Weekly, as well as named a Notable Book by the New York Times; Blacker Than a Thousand Midnights (Hyperion, 1994, Anchor paperback 1995); The Gettin Place (Hyperion 1996, Anchor paperback 1997); Highwire Moon (Houghton Mifflin, 2001), which was a finalist for the National Book Award and won the Commonwealth of California Gold Medal for Fiction. Highwire Moon was a San Francisco Chronicle bestseller and Los Angeles Times bestseller, and was named one of the year’s best novels by The San Francisco Chronicle and The Washington Post. It was optioned for film by Little Monument Pictures; A Million Nightingales (Pantheon Books, 2006) was a San Francisco Chronicle bestseller. It was a Finalist for the 2006 Los Angeles Times Book Prize and the 2006 Southern California Booksellers’ Award. It was released in paperback May 2007.  Her novel Take One Candle Light a Room was published October 2010 by Pantheon Books, and released in paperback in 2011 by Anchor Books. The book features characters from the previous novels, and is set in Los Angeles, Rio Seco, and Louisiana during August 2005. It was named a best novel of 2010 by the Washington Post, The Los Angeles Times, and Kirkus.

Her new novel, the final in the Rio Seco Trilogy, is Between Heaven and Here, published September 12, 2012, by McSweeney’s. It was named a Best Book of 2012 by The Los Angeles Times and The Daily Beast.

Her first middle grade reader, The Friskative Dog, was published by Knopf in March 2007. Her picture book Bear E. Bear was published in 1995 by Hyperion Books.

Her short fiction has appeared in Zoetrope All-Story, McSweeney’s, Black Clock, TriQuarterly, Story, Ploughshares, The Ontario Review, and North American Review, among other magazines. Her short story “The Golden Gopher,” published in Los Angeles Noir, won the 2008 Edgar Award, given by the Mystery Writers of America. Her short story “El Ojo De Agua” was chosen for the 2007 O Henry Prize collection, and was a finalist for a National Magazine Award in 2007. “Mines” was chosen for Best American Short Stories 2003 and won a Pushcart Prize in Fiction. “Bridgework” was a Distinguished Story in Best American Short Stories 2004.

She has been a regular commentator on National Public Radio’s All Things Considered. 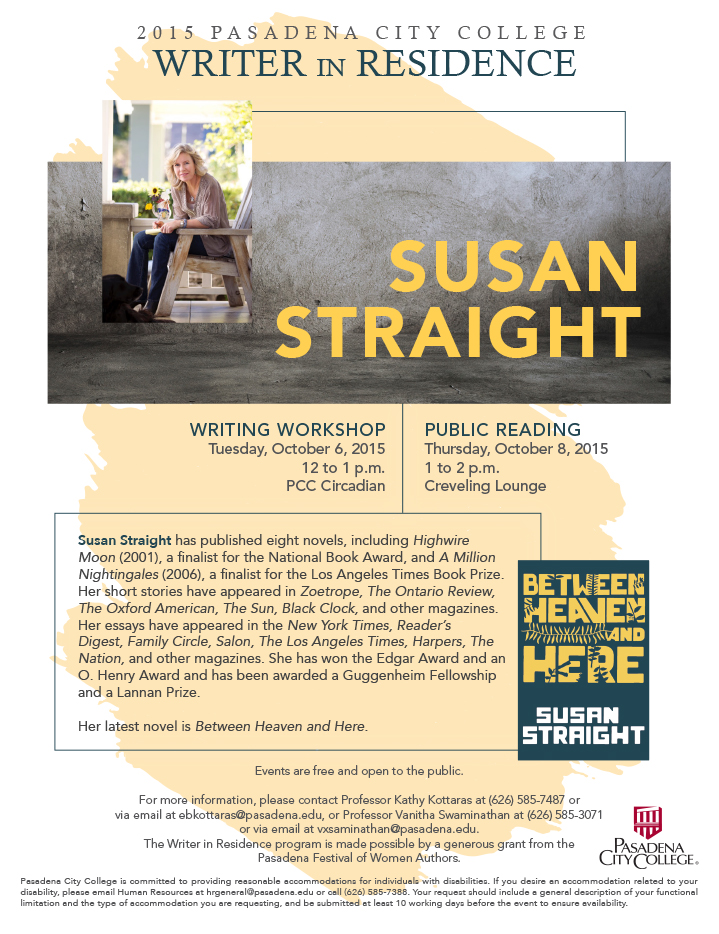 Articles with the PCC logo are held in PCC Library's research databases and require a LancerPoint Username and Password for off-campus access.

Books in the PCC Library

PCC Library is home to many of Susan Straight's works. Check one out with your Lancer ID today!