A compilation of resources including books, articles, films and websites which are about Martin Luther King, Jr and his contributions to the U.S. and the world.

The Films on Demand database has several films to offer which relate to Martin Luther King, Jr.

If you are off campus a LancerPoint username and password are needed. 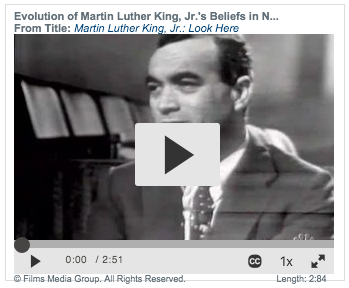 Videorecordings in the PCC Library

The videos are located east of the atrium on the main floor of the library.

Audiocassettes in the PCC Library